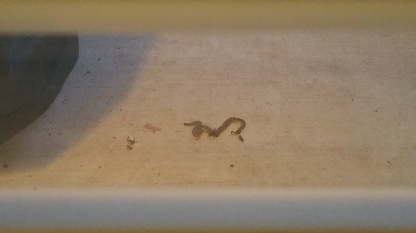 Matthew 3:4 – talks about how John the Baptist lived. One commentary response was, “Do you practice what you preach?  Could people discover what you believe by observing the way you live?”  We live in a pit of snakes/serpents/vipers everyday.  Call them what you will.  When I think about the characteristics of snakes, I associate them being sneaky, crafty, cunning, and poisonous creatures.   Take into consideration some of those crafty snakes from the Bible and movies.  Satan in the form of a serpent visiting Adam and Eve in the Garden of Eden.  Moses’ staff turned into a serpent, although the purpose was to devour Pharoah’s staff turned snakes.  Kaa, the Indian Python in Jungle Book.  Nag and Nagaina, the king cobras in Rikki Tikki Tavi.  Nagini, Voldemort’s giant hybrid python in Harry Potter.   I even had my own snakes last October, which led me to hire a lawn service to mow my grass.  I went as far a beheading one, which appeared to be a rattlesnake to me.  Then again, I deem ALL snakes poisonous because I’m so terrified of those that crawl on their bellies. While my snakes were only about 13 inches, there were terrifying nonetheless.

I wished the first one away. I was mowing the grass along the sidewalk and I guess I disturbed his rest.  He came slithering out of the grass.  I ran to the garage, grabbed a shovel, but when I got back, he must have burrowed himself deeper into the grass.  My nerves were so shot that I couldn’teven finish mowing the grass.  After taking a 4-hour break and came back to finish, that joker slithers out again.  Only this time, he decides to go across the street into the neighbor’s yard.  Good riddens!

If that wasn’t enough, on a Tuesday night like I always do before I lock up for the night, I looked out the back door to make sure everything was kosher.  How come, I see this baby rattle snack (pictured with this post) on my back porch!  Y’all, if someone had recorded me acting a fool, I could have one a cash prize.  Looking back it was kind of ridiculous, but I was terrified and all I knew I had to do was kill him!  I ran the garage, grabbed the shovel and being too afraid to step out onto the back porch, I cautiously opened the door, to make sure there wasn’t a family of them.  All I had ever been told was to cut off the head to stop the snake.  Being afraid to venture onto the porch, I stood in the doorway, extended the shovel in hand, butt pushed back inside, raised shovel and came down in one fallen swoop decapitating that snake…while my eyes were closed!  OMG!  I opened them once I heard the shovel scrape against the concrete.  His little head was spinning through the air and I proceed to go “Rambo” on him, cutting him into more pieces.  Y’all don’t even know!  Then I had to get that joker up, but not that night.  I took two Benadryl and took my behind to bed.  The next morning I got up and hoped some critter had come along and eaten him, but to no avail.  The only thing out there was a bunch of darn ants gathering to eat his behind! That left me no choice but to rake him into a box and chunk him in the trash.  Thank God it was trash day.

The lawn service was already schedule to come on that Wednesday evening.  Do you know they had the audacity to kill another snake on the side of the house?  WTH?  Did I have an investation?  Was there a nest somewhere in my yard?  I wasn’t trying to find out.  I went and bought some Snake-Away from Home Depot and along with moth balls, put that out in my yard!  Needless to say, I have since sold my Honda lawn mower.  I have no intentions of EVER mowing grass again!

All this to say, yes, I am terrified of snakes!  In fact, I’m scared of any reptilian-like creatures, i.e., frogs, lizards, salamanders, gekos, etc.  So I had to decide how to face the snakes in my life because they will come.  I decided to do what the Lord promised me in His Word.  When the serpent deceived Eve, God spoke and said, “And I will put enmity between you and the woman, and between your offspring and hers; he will crush your head, and you will strike his heel” ( Genesis 3:15).  God was speaking of Jesus.  As I was bringing that shovel down on the snakes head, that is exactly what I thought, “Jesus is going to crush your filthy head and so am I!”

Now this was an actual snake, but we do encounter people who have snake-like characteristics.  In the same way with an actual snake, we must, metaphorically, cut off their heads when they lie and cause descension.  We crush it before it ever begins.  But we also have to learn how to recognize the venom they spew.  I know of a person who actually has the physical and characteristic traits of a snake.  Small, hard lined lips.  Slit eyes.  Never looking you directly in the eye when she talks to you.  Throwing you under the bus as sure as I am A.Redbone. Never accepting responsibility and always blaming someone else.  She gossips about everyone around her and remains hush, hush about her own life.  She gets dirt on others, but you know nothing about her.

Regardless of the snakes, I try to always be aware of my surroundings.  I look high and low for snakes lurking around corners, hiding in trees, sitting in a cublicle next to me, etc.  They will always be present, but the choice is mine in how I decide how to face and conquer the snakes.

I have said it before and will continue to say it.  America has a heart problem!  I am so sick of having to justify being Black or feeling a certain way when ignorant comments are made and especially, when you have not (and are not interested) in walking in my shoes as a Black woman!  OMG!  You tell us we’re being too sensitive, or that we’re too angry, and that simply is not true.  Perhaps you’re not being sensitive enough!  You make stupid comments that I endure daily and you laugh at ridiculous comedic skits about Black people  and those skits aren’t hardly funny!  What’s worse is you have the audacity to show me this stuff and think I’m going to laugh and be okay with it.  All you get from me is the look that says, “WTF,  Dumb ass!”  And I then walk away shaking my damn head!  Really?  Yes!  It happens all the time.  I’m just pretty fed up with ignoring it and sitting back silently and taking it (or so you think I should).  Now, I just ask, “Really? Why would you show ME that? It’s offensive to Black people.”

This week I posted an article by another Black librarian and the jest of the article for me was that Black librarians (male & female) don’t get the same level of respect our white counterparts do.  However, someone bothered to claim this article was about Trump, while minimizing the message of the article.  Everything is NOT about Donald Trump!  Needless to say, I have now deleted that person on Facebook.  I must acknowledge that he is a white male and I’ve known of his overly conservative, right-wing views and comments for some time, but the fault was mine in that I ignored them.  Now, I’m done!  Kick rocks, Buster Brown! You can post that crap on your page…Not mine!  Don’t go looking for him because he has been DELETED!  The article in question was this,  Librarians in the 21st Century: It is Becoming Impossible to Remain Neutral  , by Stacie Williams, a Cleveland, Ohio Librarian.

Back to my main point.  When a patron approaches the desk and looks around as if I’m invisible…I look around with them.  Finally the exchange goes like this:

Me: May I help you with something?
Patron: Is there someone here who can help me?
Me: What is it you need help with?
Patron: I need helping finding information. (still not acknowledging that I’m at a desk that is clearly marked Reference Desk or that I have a name badge on with my tile, Librarian).
Me: Sir/Ma’am, this is a reference desk. Anyone at this desk is professional trained and has a master’s degree in library science and can assist you. Please don’t ask that question again. Now, how may I help you?

As a public servant, I try not to profile or judge a person based on looks.  Do I fall short?  I’m sure I do!  When helping students select books for pleasure reading, I always tell them not to judge the book based on the cover.  This hits home with me everyday because when I feel myself moving in the direction to “judge” without having all the information.  We could all stand to be more sensitive and accepting of each others’ differences, but DO NOT claim that you understand being Black, when you’ve never been Black.  By the way, having Black friends does not count!